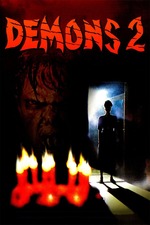 Like a faded Xerox copy of the original movie, set in a nondescript apartment block rather than the distinctive Metropol. Bava and Argento try to bottle and sell lightning twice, but it really doesn't work - the whole point of the first film was the idea of the film coming to life for the audience, not just random fodder in a random location. Broadcast TV in an apartment block just ain't the same.

The acting, which hardly pulled up any trees in the first film, is positively dendritic this time round. David Edwin Knight is a charisma vacuum in the lead role, Bobby Rhodes returns, inexplicably reincarnated as a gym instructor and Asia Argento appears courtesy of daddy's production pull.

Processed-to-hell uber 80s soundtrack, poorly edited, full of jarring hard cuts, jumping between scenes without drive or purpose, story threads go nowhere. The identikit punks-in-a-car don't even make it to the party this time and don't do anything nearly as memorable as snorting coke out of a can. It's got even less plot than Demons and what there is makes no sense - the broadcast seems to start as reportage on the events of the first film, morphs into a ropy horror film, before a demon comes out of the screen, Videodrome-stylee, to wreak havoc on the unsuspecting residents. But it only comes through one screen, which isn't how broadcast demon delivery works, and frankly it would have been far cooler if the same demon emerged from a bunch of TVs simultaneously and there were multiples of it running round the building. That would've been a proper head fuck!

I'd mentally checked out of this well before the end. Minor props for decent lighting, gnarly make-up effects and an unexpected umbrella impalement but that's about it.