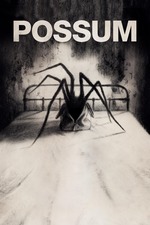 Darkly oblique, low key character study of a damaged mind. Philip is a puppeteer by profession, who is forced to return to his childhood home following his disgrace at his last paying gig. He terrified the kids with his puppet, a macabre arachnid creation with a blank head resembling his own. This is Possum, an alter ego which has haunted him since entering his life in childhood, preventing him from becoming a functioning adult.

Scored by a brooding collection of dissonant field recordings and dark ambiance from The Radiophonic Workshop and envisioned through a muted palette of greys and earth tones, deep shadow saturating every frame, Possum is about as bleak as it gets. It riffs on The Babadook - a monster rendered in scratchy charcoal on the pages of a book brought to life through sheer force of will - and in particular, Cronenberg's Spider. The puppet itself seems like a direct reference to that film and its tone is very similar too; intensely claustrophobic, given that you spend the entire duration viewing the world through the eyes in front of a severely impaired and introverted mind.

It's a relentlessly dour vision, Philip's world consisting of one scummy time-locked location after another, from the flyblown yellow apartment to the desolate army barracks. It's also perpetually unsettling, given what it's hinting at throughout; you're never quite sure exactly what Philip is capable of, but suspect it's pretty horrific. And what is behind that locked door? Like Ralph Fiennes in Spider, or Peter Greene in Clean, Shaven, Sean Harris brings Philip's derangement to life with grueling authenticity. It's a strong and unnerving performance that never drops its mask or lets in a chink of light.

But the film's strength is also its weakness: we're trapped inside the mind of the protagonist, and it's not a good place to be. Philip's obsessive nature - repeating the same few actions, emoting very little and silently reliving past traumas over and over again - means it can sometimes slide into banality. At times, it's as much of a chore to sit through as it is a darkly immersive experience.

The Field Guide to Evil