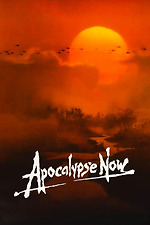 This an example of film making at its finest. Honestly, I don't know a whole lot about the infamous production of Apocalypse Now, other than the fact that it was awful; and yet, the way the film is crafted and put together is so incredible. The troubled production probably increased the hysteria and darkness that the film conveys as it journeys into the dark hearts of men and their desires.

The film has a simple premise, US Army Captain Benjamin Willard (Martin Sheen) is ordered on a covert mission into Cambodia to assassinate a Green Beret, Colonel Kurtz (Marlon Brando), who has gone insane and set himself up as a god among the local native tribe. It's an accessible premise, allowing for the film to be consumed by even the most casual movie watchers, and yet this film is anything but shallow. It's a journey into madness and hysteria, and an observation into the darkness of humanity. I could write an essay analyzing this film; there's is just so much to talk about.

Most films of this ilk involve a task, one that becomes increasingly important to the protagonist as the film progresses. Willard pursues his quest relentlessly, as it begins to corrupt him like the man he is trying to destroy. The film presents this dark study through eerie music, dark hallucinogenic images, and some brutal scenes; essentially taking the viewer into the depths of hell. It's here where Coppola succeeds the most. His ability to create a living "hell" is so amazing, and it perfectly captures the mindset of the soldiers. The one scene that really stood out to me was the scene where the soldiers are fighting over a bridge, so confused, so desperate - they don't even know who their commanding officer is. It's utterly haunting. In addition, it provides a commentary on war and religion, making the subtext even more vast. The film is weirdly beautiful, and true picture of the evil and hell from within ourselves - as well as the simple duality of man, consisting of morality and the more primordial instinct.

The acting is great on all fronts. The cast is star-studded, and everyone plays their part perfectly. Sheen is a man who's a bit off-kilter and one who slowly becomes obsessed with accomplishing his task. Duvall is instantly memorable as the surfing officer, who plays "Ride of the Valkyries" and loves the smell of napalm in the morning. Brando's Colonel Kurtz is a mysterious and insane figure who seems larger than life, a man who seems intelligent and inherently heinous all the same. The characters are complex and their arcs are interesting, especially Willard's own descending state of mind. It's also worth mentioning that I didn't even recognize the young Harrison Ford, but he did a good job as well.

This is certainly Coppola's biggest, and most ambitious film, and it shows. The cinematography is incredible - from a soaring group of helicopters, to a dark trenched riverbank - everything is captured in a stunning manner, conveying the hellish imagery and still taking my breath away. the other technical aspects are equally astounding, and the sheer size and scope of the film is instantly admirable.

Coppola's direction transcends itself. Apocalypse Now is beautifully haunting, utterly hellish, terrifyingly intelligent, and excellently wrought. The troubled production obviously didn't hurt the film at all, and most likely increased the dark quality it portrays. Not only is this one of the best films ever made, it's a psychoanalytical journey into places none of us would dare to venture to on our own. I can only thank Mr. Coppola for taking me anyways.

Eyes Without a Face