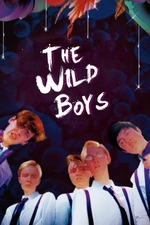 The Wild Boys is vibrant, grimy, next level queer cinema. It's a seafaring fantasy about five sociopathic boys (all played by women) who are tried for the accidental killing of their female caretaker and placed under the supervision of a masochistic boat captain. The boys share a unifying collective evil between them that they have named TREVOR. TREVOR manifests periodically as a bare-breasted dog person with glowing red eyes. That's only one example of some of the face melting imagery that The Wild Boys has to offer. They're eventually interred on a tropical island that is perilous, full of supernatural fauna, and possessing transformative powers. It's an allegory that turns into a bedtime story that turns into a nightmare that turns into a wet dream.

It reminded me a bit of The American Astronaut for how it generates a fantasy world on the cheap, relying on the transparency of the methods themselves to encourage the suspension of disbelief. It works like crazy. It runs too long, but it's goddamn visionary nonetheless.