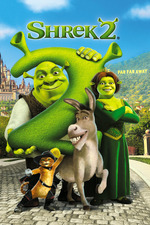 Undeniably far superior to its predecessor - I think its a little over saturated with pop culture references and a lot of them are shoehorned, but for the most part the jokes actually land, I found myself actually laughing a lot more than I expected to. The downside is that's kind of all there is to it. It feels like a lot of jokes with a plot that's written just to deliver those jokes. It's enjoyable but not really anything I'd consider great as an entire unit.

This entire movie, however, is worth watching for the Cops parody, that is just undeniably incredible. I'm also frankly disappointed that they made a Puss in Boots spinoff instead of the spinoff that deserves to be made, which is that of the Three Blind Mice. Best characters hands down.

This concludes the half of the Shrek films that I've seen before and I am not at all looking forward to the other two.