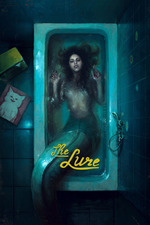 We have to sing together.

Wow. The kind of movie that makes me really love the experience of going into movies blind. It's so wildly different from anything I would have expected, but it didn't take long to sell me on what it was offering. The amazing thing about foreign cinema in most cases is that it's not bogged down by the thick sludge of Hollywood. Nobody in America would produce "sexy, romantic, mermaid horror musical" because America has such a problem with making things that aren't for everyone. Don't get me wrong - there's still plenty of phenomenal work coming out of Hollywood, and I love my fair share of the crowd pleasing, profit driven blockbusters, but you just don't find something this out there in America. This movie, and others of its wacky, weird ilk, don't feel like they exist for anyone. It's pure, unadulterated creativity and artistry. Agnieszka Smoczyńska wanted to make a murderous mermaid musical and by God she did it.

For real though, this movie is balls to the wall insane and just as equally fantastic if you can get past its barrier of entry which simply asks "are you gonna enjoy this bloody mermaid musical?" To be honest, if you're not into it after the first musical number, you probably won't care much for it, but if that kicks in and you think to yourself "oh, let's fucking go" then you're in for one of the most unique and fun rides you've had in a while. It's a unique take on a coming of age story, it's a unique fantasy tale, it's a unique musical, and it's a very interesting take on a tragic horror romance. All of those things written in a list don't seem like they would go together, but it's shocking how well Smoczyńska blends them all together, while also including beautiful and vibrant cinematography and some very solid visual effects.

The kind of movie that reminds me why I love movies. Because the existence of cinema as an art form births beautiful and insane visual storytelling like this.