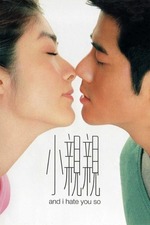 And I Hate You So

Made during the down swing of UFO, this has the look and feel of peak UFO productions but no one's going to think they are watching the same calibur as Leslie Cheung, Tony Leung, Sean Lau and Anita Yuen.

Not that the acting was the drawback. Aaron Kwok and Kelly Chan are fine. She's as believable as a columnist at least, if not more, than Sarah Jessica Parker. Kwok is adaquate for what the script gave him. We just never really got to know him as a character. I think they want him to be kind of chauvinist unlikable and in that case, they should have went with a character actor instead of a pop idol.

Despite its shortcoming, I do admire the screenplay, as with most UFO films, tried to straddle between blockbuster and quirks. This is pretty much a You've Got Mail riff and they smartly didn't play hide and seek with the two characters. In fact, they even have the two showing up at the same party, just like You've Got Mail.

There's also a subplot with Theresa Mo and Eric Tsang that feels like they should be in a different movie. But you're kind of glad they are here to liven things up a bit.

There is a devastating cameo in the third act. And I don't think anyone would think that ending is earned. But overall I appreciate the effort before the ending.