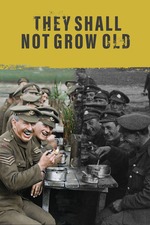 I have more respect for this documentary than any other I have ever watched. The sheer dedication of Peter Jackson and his crew to this film is admirable in and of itself, they managed to find 90 minutes of usable audio and video clips from the dawn of the recording devices that were then somehow formed into a gripping and personal depiction of army life, and rounded out and made perfect by painstaking colorization, animation, and sound design. I could literally watch this film over and over again all day, or even just listen to it for that matter, as just the typical gravelly voice of an Englishmen with an accent is reminiscent of ASMR enough that I would have no problem taking in the stories of these men in a podcast form. However, the effort put int the visuals takes it form being an audio file that I would listen to and only enjoy in the moment, to an experience I will never forget. This documentary manages to out-do all other films ever made about World War 1 (alla 1917 or All Quiet on the Western Front) as it manages to be perfectly cathartic and pleasureful to watch in the moments where the soldiers are feeling that same way, and then the most horrifying and terrible thing you have ever seen in other parts, as you are watching real men really be killed before your eyes while being narrated by the only people that can do these horrors justice, those whole experienced them with their very own eyes. That all being said, my only technical problem with the film was that there was obviously only a certain amount of usable clips and images, so lots of elements do get re-used, which isn't a deal breaker, but it is a little jarring when in a battle scene you get fully invested in the lives of these men and the death on screen, and then see the same image of a corpse twice, each with an accompanying gun-shot sound effect (other than a lack of footage I have no complaint with any other part of the film, it really is close to flawless). I am usually a firm believer that every film is not made for everyone, and if you are interested in something see it, and if not, don't, but in this case this really is an essential film that needs to be experienced by everyone in life (certainly in my opinion Jackson's best work of all time).