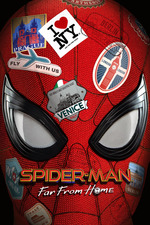 Despite devoting all of SPIDER-MAN: HOMECOMING to the notion that teenage superhero Peter Parker should stop trying to be the next Iron Man, and should instead be the first Friendly Neighborhood Spider-Man, here comes it's sequel, SPIDER-MAN: FAR FROM HOME, to tell you: "never mind." I hope you're ready for IRON MAN, JR., because that's pretty much what you're getting. FAR FROM HOME works overtime to obliterate pretty much everything that was special and unique about Spider-Man within the context of the MCU, and it's a goddamn shame.

BEWARE: I'M GOING TO SPOIL LOTS OF THINGS BELOW

You know the plot. After Hulk resurrected the half of the universe that Thanos killed with "the snap," Peter and his friends find themselves back in high school but half of their class is 5 years older. On a class trip to Europe, Peter gets conscripted by Nick Fury to fight giant elemental monsters alongside a new hero named Mysterio, who seems to be an amalgamation of Iron Man, Thor, and Doctor Strange. Only, duh, Mysterio's actually a villain and there's something deeper going on. Peter's going to have to live up to Tony's expectations to succeed and, well, you know he will eventually do just that.

The actual story here is ostensibly about self-deception and how easy it is to live in an alternate reality if that's what makes your life easier. Mysterio's mantra is that people will believe anything, provided it's what they *want* to believe. He figures that he can make up fake villains and play a fake hero because people in the Marvel universe have been primed to accept that level of craziness uncritically. When it's revealed that Mysterio is powered almost entirely by petty resentment and gussied-up deep-fake tech, and (later) that he's allied with a mudslinging right-wing conspiracy theorist, you start to understand that Mysterio is really just a thematic substitute for Donald Trump, "fake news," and the entire right-wing politico-media complex. This works well with Peter's arc... sort of. Peter just wants to be a kid and enjoy his vacation. He doesn't want to deal with the problems in front of his face, much less take up Iron Man's mantle and be an on-call superhero in response. So, like everyone else, he eagerly accepts Mysterio's lies and hands over Tony's legacy at the first available opportunity. There's a good kernel in here about Peter coming to grips with that whole power-responsibility thing, and learning once again that he's never going to be able to live out a normal teenage existence.

Only... the movie doesn't really grapple with this in a meaningful way. When Mysterio's villainy is finally revealed, Peter feels stupid and guilty, yes. But he doesn't actually change, does he? He doesn't interrogate his own behavior in a way that leads to personal growth. He'll admit he screwed up and how, but the movie never stops to talk about why. Peter's put his friends in danger, he's jeopardized world security, and he's betrayed the trust of his dead mentor and surrogate father all because he selfishly wanted a vacation--this is all in the text of the movie, yes. But FAR FROM HOME never translates this into a change in Peter's behavior or outlook. It's just "oops, didn't mean to," not "oh, that's not a choice I can responsibly make anymore, I have to be better than that." The mistakes all just sort of roll right off Peter's back as the movie literally stops to tell him not to worry about it, but to just get down to work. I'm sorry, but powering through your mistakes to get the job done, and half-assing or ignoring the lesson to be learned, is an Iron Man story. It's not a Spidey story. That the movie ends with Peter swinging his new girlfriend through the city in broad daylight, after a two hour lesson about how he's been too cavalier with his responsibilities and who he endangers with his secret, is baffling.

But FAR FROM HOME's story problems don't end there. Arguably, the bigger issue is that Marvel insists on hiding the ball with Mysterio, devoting more than half the movie to a ruse that literally nobody is going to be fooled by. Although Gyllenhaal is excellent in these scenes playing a kind and gentle mentor, it's all just so tedious. Think of Hitchcock's famous explanation of the difference between suspense and surprise--surprise is when there's an ordinary scene but a bomb under the table suddenly explodes; suspense is when the audience knows the bomb is there, which gives the otherwise ordinary scene new urgency and drama. FAR FROM HOME wants to surprise you with the Mysterio reveal, but it can't because everybody on earth already knows who Mysterio really is. But then FAR FROM HOME also can't fill you with suspense, because it's devoting a ridiculous amount of time and energy into denying that there's anything amiss. It's like everyone knows the bomb is under the table but the movie refuses to acknowledge it. So there's neither surprise, nor suspense.

On top of that, the characters here are much shallower and less interesting than they were in HOMECOMING. In HOMECOMING, Aunt May is a sensitive, maternal figure scared for Peter's well-being. Although that film steadfastly refused to discuss Uncle Ben openly, hints at a recent trauma gave Peter a good reason to keep his secret from her. So what does May think now that she's learned that Peter is Spider-Man, and now that they've both been dead for five years? Actually, she thinks it's super cool and she is very excited for her teenage nephew--who has died once before, remember--to go out there and fight more deadly threats. Oh. Okay. Peter's classmates are similarly flattened. Although there are some fun jokes here and there, there's almost no sense of the camaraderie that HOMECOMING worked so hard to build. Those hang out scenes where a regular high school existence is contrasted with Peter's superheroics are much shorter and more perfunctory here. Where Peter's sneaking off caused friction with his peers and landed him in detention in HOMECOMING, here he slips out of his room at night and disappears for long stretches of time and the joke apparently is that nobody cares. The actors are so good, and many of their jokes are great, but there's no conflict to animate any of it.

Lastly, it bears mentioning that FAR FROM HOME ends with a double-reveal for the next installment that is godawful on pretty much every level. First, we meet the new J. Jonah Jameson... who is the same as the old J. Jonah Jameson. At long last, J.K. Simmons has returned to the role after a grand total of zero other people have played him. Marvel and Sony could have cast literally anyone in the world, but they went back to Simmons. How fucking boring. And then, to top it off, Jameson tells the entire world that Peter Parker is Spider-Man. Again, this is an Iron Man story, not a Spidey story. Peter trying and failing to balance his regular life and his superhero alter ego is at least half the point of the character, and that's especially true in the MCU where he's literally the only hero with a secret identity--or was. You can tell me all you want that the next movie will find a way to walk this back, but it's hardly a great argument to be like "actually, none of this matters and they're going to call a mulligan." How is that better?

It's not all bad, though. FAR FROM HOME really excels in its action sequences, where director Jon Watts goes wild in a way that isn't even hinted at in HOMECOMING. There's a frantic kineticism to the way Spidey moves here that is positively thrilling--the camera stays close in on Peter as he bombs over the spiky rooftops and rockets through the tight alleyways of European cities. Not since the train sequence in SPIDER-MAN 2 has live-action Spider-Man felt so dynamic. But it's a late-film confrontation with Mysterio that really stands out. It's a dizzying, breathless, phantasmagorical flight of imagination as Mysterio bombards Spider-Man with illusion after illusion, virtually breaking his brain as reality and fantasy become completely indistinguishable. The visual bombardment Watts and his team assemble makes DOCTOR STRANGE's trippiest scenes feel like a pleasant stroll through the park. Because Watts typically employs a clean, classical, meat-and-potatoes style, people perhaps missed just how good he is with his camera in COP CAR and HOMECOMING. But you absolutely cannot make that mistake here.

If it sounds like I hated FAR FROM HOME--believe me, I didn't. It's fine. It meets that minimum threshold for competent entertainment that Marvel movies always meet. But it doesn't do much more than that. It trades in HOMECOMING's shaggier, looser, more idiosyncratic tone and feel for something more streamlined and polished, but muted. And that's a real shame.