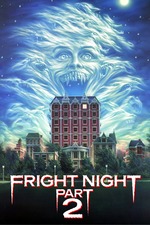 Not sure what it is about Fright Night Part II that everyone dislikes; for years I had assumed this would be boring, unnecessary trash. What I got, when I finally checked it out, was a "How could the same thing happen to the same guy so many times?!" plot with a few clever tweaks, and plenty of ridiculous 80s horror-cheese spread on-top.

I was happy enough just to spend some more time with the two main characters, but this also might be one of the only times the old "the main character forgot/doesn't believe what happened in the first movie!" sequel-plot works.

I liked the tweak of having Peter Vincent be the believer and Brewster have lied to himself for so long that he began to believe in it. About every 10 or 15 minutes there'a s good gag or gore-scene, and the whole thing is pretty amusing through-and-through.

I mean, c'mon, rollerskating vampires, Jon Gries as some kind of hairy-vampire who scales walls, the funniest vampire death this side of the original Buffy the Vampire Slayer, and a climax that culminates in a huge, wonderful explosion.

Whatever man, this movie was super entertaining and I truly believe it is worthy of rediscovery by those who probably saw it on VHS in the 90s; the BluRay makes this thing look damn gorgeous.