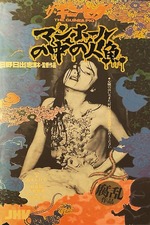 (when decay becomes a defense mechanism)
the idea of the mermaid is important as this is the mythologised ideal female muse the male artist desires to make perfect artwork out of but realises that he can never get to her essence, and he can only wring pathos out of the idea that she is suffering, that suffering is an intrinsic part of womanhood, because how else could he maintain that unequal dynamic of artist/muse without the imposition of something which is not there.
the mermaid lies supine, gradually distorting herself, allowing herself to be overcome by gore and viscera, in order to ruin the perfect portrait he wants. to force him to confront his fear of female bodies that are not normative, not idealised. he cannot fuck her, (her legs are fused shut as a preventative measure), so he thinks he can devalue her in a different way - by painting her, by creating a version of her entirely crafted by his gaze. but as she lets loose a vortex inside herself, births death thousand-fold, none of this subjugation can go according to plan.
(keep yourself warm in the winter with a coat of oozing pustules--that way he can't remember what your breasts look like--that way he has to omit that detail)