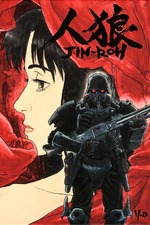 Man, this anime gets me. Both aesthetically and intellectually. Jin-Roh is the complete opposite of being bombastic and loud. Pretty contradictory considering how it depicts the story of the capitol police in alternate-universe-post-war Japan, who wear heavy armors, spooky glowing goggles, and -- you must see it to believe it -- fire MG42s from the hip!

The description alone should give you an impression of guns blazing and bullet casings raining from above all The Matrix like. Walls painted with blood with heavy metal blasting in the background. But no, Jin-Roh is light years away from that. It's more like a delicate character study with a minor twist near the end. Here, we study Kazuki Fuse, a rookie capitol police who failed to open fire on a young terrorist and ended up putting the lives of his colleagues at risk. (I'm putting it as vague as possible because anything beyond that is spoilers territory.)

The most impressive feat is definitely the sound design and sound editing. The amount of effort they've put into even the smallest detail is astounding. These people seriously mean business because I swear, from taking off a helmet to a molotov explosion, I couldn't find a single flaw. What's another word for impressive because I'm at a lost for words!

Professionals! These people are professionals! Among all the anime films I've seen, Jin-Roh easily belongs in the top-tier.