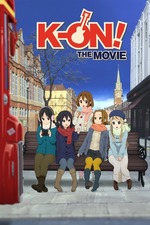 The single most beautiful thing I've ever seen in my life, cinema at it's purest form. K-On! is the rawest, most honest, and most brutal depiction of high school life during post-war japan of all time. Gritty and unflinching in its portrayal of asian children picking up the fight against western imperialism through the power of music.

Toyosaki Aki is absolutely sublime as Yui Hirasawa, the lead singer of the band known as After-school tea time who suffers from both ADHD and narcolepsy. The soundtrack is no doubt God's mightiest gift to mankind. Notable examples include "Fuwa-fuwa time" and "Rice is a side dish". They're the tearjerkers to end all tearjerkers.

K-on! is one of Japan's greatest treasures.
Kyoani finds a way.