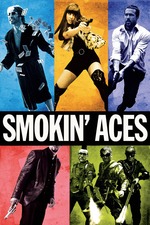 Smokin' Aces is mindless, and not quite the fun type. It's over-the-top, yet not necessarily enjoyable. The film had an advantage from the start. The premise is interesting (bunch of hitmen going for the same target) and the character introduction is pretty impressive. The setting was established within 10 minutes, no nonsense, let's rock and roll. It looked promising. But that was before Joe Carnahan threw everything out the window.

There's some really sloppy camera work and editing, no one knew what they were doing. Seems as if Carnahan tried to pull off a Guy Ritchie but ended up making a mountain dew commercial. But I'm only talking about the second half here, the first half felt like an entirely different film. It was energetic at the right level, the pace was reasonably fast to keep the adrenaline pumping, plus Chris Pine and Ben Affleck shows up out of fucking nowhere! There were no opening credits so when these two motherfuckers leaped onto the screen it almost felt like a jump scare. That was one of the very few pleasant parts in the entire film, I'd say.

"You know up here in heaven, it's beautiful."