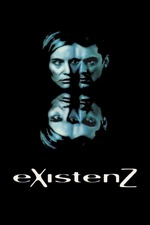 The Ron’s review published on Letterboxd:

I honestly just don't think I'm going to be a fan of David Cronenberg's early body horror films. With eXistenZ being my third film from that time in his career I just can't get into it. I like weird sometimes, but his body horror films are just weird for the sake of being weird in my opinion. eXistenZ however was not only weird but just plain bad if you ask me.

Allegra Geller (Jennifer Jason Leigh) is a virtual reality game designer. Her latest games pending release puts her on the run with marketing trainee Ted Pikul (Jude Law), when she is almost assassinated by a pro-reality enthusiast. This forces her to play her own game with Ted to determine if it's been damaged.

First off this film was not what I was expecting. The synopsis mentions a virtual reality game so I guess I expected a virtual reality game in a traditional sense. You know you where a headset or some glasses and are transported into a virtual reality world. Apparently I wasn't taking into account this is a pre 2000's Cronenberg film and traditional virtual reality just isn't weird enough for him. The pods used to play the game are definitely not a wearable headset or glasses. They're alive, ported directly into your spinal cord with what closely resembles an umbilical cord. Lets just say it's pretty fucking gross! There's a lot of gross out moments in this film, something Cronenberg was known for in his early work. I'm fine with being grossed out and weird can be a good thing in film, but here it's just weird and gross with a weak story and bad acting.

I honestly thought the plot was pretty stupid. The virtual reality game at the center isn't a game I'd want to play and like those GameFly commercials I felt burned by a bad game. I guess watching it on Netflix instead of purchasing it was the equivalent of GamFlying it first. I just didn't like the story at all, and the wooden acting was painful to watch. Even if it was intentional to mimic a video game world it still sucked. Jennifer Jason Leigh is just barely passable as an actress anyway, but even Jude Law who I normally like is bad. Supporting roles by actors like Willem Dafoe and Ian Holm are really just decent actors in throwaway parts if you ask me.

I actually wanted to rate eXistenZ lower, but taking into account I haven't liked any of Cronenberg's body horror films except maybe The Fly which I haven't seen in years and don't remember all that well I decided to give it a 2 star not for me rating. I didn't hate it, I just didn't care about the story, the characters, or how it any of it would turn out. Cronenberg body horror has it's fans, but I'll take more recent Cronenberg like A History of Violence and Eastern Promises any day of the week over this weird shit!