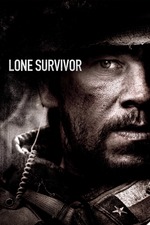 First off, I didn't read the book. I know, I know, the shame. Too many books. But I love true stories, and actually had intended to see this in the theater. And for all the posturing and machismo I was sure to see in this film, I have so much admiration for how badass Navy Seals really are. They deserve to throw around some machismo.

Anyway, the movie DOES have some of that chest-thumping. But whatever. It is action-packed and brutal to watch (we know, after all, there is only a "lone survivor". It doesn't lessen the build-up. The heroism in these men, it is impressive. As we were watching though, we all felt like it was a stretch. Did these guys really take a dozen bullets in the arms, legs, head and keep going? Really?

Turns out, yes. Autopsies were reviewed, and indeed these men were hit over and over again while they drug themselves around, skirmishing for FIVE days with the Taliban. Some facts were even downplayed...Marcus Luttrell actually pulled himself to the safety of the village due to temporary paralysis, versus hobbling.

Knowing that the events portrayed are, for the most part, accurate, makes this movie a must-watch, so at least we can honor these men that gave their lives for their country.