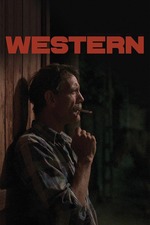 Once again my theory that female directors make better films about masculinity complexes than men do is further confirmed. Personal expectations for Valeska Grisebach's German-Bulgarian co-production Western were high to say the least, amazingly the film exceeded those already lofty expectations. Though there is much to be said about the various masculinity issues the film touches on, the heart of the film is about an issue as old as humanity itself: "the other"--the fear of the other, the outsider, how we connect to people and the problems that can arise when there are barriers to these connections, namely language. Grisebach's choice to use untrained actors is always a risky one but pays dividends in Western. It is rare to see such naturalism on screen, that well, fitting perfectly with the film's poetic meditation on feeling lost in a foreign land and the search for true, respectful human connection. Grisebach holds the entire film together thematically, while never becoming preachy and predictable, relying on the various layers she has precisely structured to continuously engage with the common theme of "the other" from different angles, with the trust she puts in her first time performers (such as the lead, weather worn, Meinhard Neumann) evident, allowing the entire cast to comfortably and realistically bring emotional complexity to their characters and story that is astounding. Western is one of the finest films I have watched so far this year.