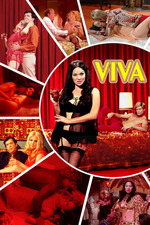 For being less than a decade old, it may have been just enough ahead of its time not to receive its deserved acclaim. It's Down With Love, but glossier, and with far more bite than (mere) homage. As such, it's rollicking and hilarious, utterly saturated in a celluloid, 1970-era color palette with hues that almost literally scream out at you, drunk on their own pleasure. Having seen only the trailer for the similarly beautiful The Love Witch, needed to see Biller's previous feature before getting access to her latest. Viva keeps a straight face, somehow, even as its characters emit wonderfully/painfully forced laughter.

But not only during its obvious tongue-in-cheek moments—the satire persists even during a rape scene. I'm definitely not (qualified to be) the person to say how this scene works or is okay or whatever, so I'll just note that it's there. And that it produced discomfort that was undoubtedly part of the goal to dislodge a viewer from standard viewing practices (L. Mulvey) when watching a body-genre film (L. Williams) like this one. That is to say, the rape is not oriented toward audience pleasure. In fact, traditional elements (like bodies) in general are not aimed at audience pleasure. Instead, Biller lets the sheer ridiculousness of genre codes and this era's absurd values and practices provide their own face-palmy pleasures. But as much as the film seems to look back at "those days," it also knows these ways of thinking are embedded enough in the popular psyche that the film will inevitably mess with many viewers.

But anyway, this strikes me as a pretty radical, subversive throwback whose intense meta-campiness goes full-on Brecht in distantiating its audience through overblown artifice and "false" performances that break the flow of genre expectations and rhythms.