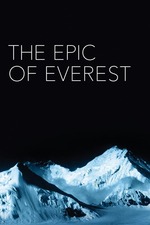 The Epic of Everest

Let me first give props to BFI for their 2013 restoration of The Epic of Everest. Not only is their 4K video restoration superb, they clearly put a lot of work into creating a reconstructed score (not available on the 2015 Kino release) as well as a modern score. After borrowing the DVD from the library, I enjoyed it so much that I bought the BFI Blu-ray bundle with *The Great White Silence* (1924), the inspiration and model for director John Noel on his Everest expedition. The booklets included with the Blu-rays for both releases give a lot of insight into the films, as well.

You can get a sense of the plot of the film from other reviews, but I felt that the director was focusing more on the personification of Chomolungma (Tibetan for Everest: Goddess Mother of the World), and the omen of daring to climb her. Not much attention or back story was put on the climbers themselves. The focus was on the journey and the trek through several countries and various types of terrain.

I haven't seen many films about Everest, but what struck me the most about *The Epic of Everest* was the fairy-tale-like vistas of this specific mountaineering trek. The camera is always in a fixed position, so almost every scene of the mountains could be a painting. The thing I wondered most was how much things have changed after decades of climbers trying to reach the summit since 1922. I was also highly impressed by the dedication of the camera operators. You can feel the cold and the struggle of the climbers as they got closer and closer to the top of the mountain.

I do want to forewarn the viewer that there is some cultural insensitivity in the film. The intertitles make the Himalayan natives out to be filthy people and not musically sophisticated. At least five minutes of the intertitles are spent bragging about the camerawork and climbing records being set during the filming. Much of that should have been left out.

Overall, though, this was clearly a memorable film for me. Highly recommended!

Dave Made a Maze

The Daughter of Dawn