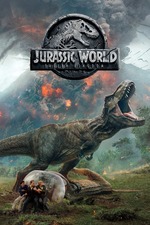 My review could really be a gif of someone staring at the camera. Just. What in the name. Why is Trevorrow still getting to pen and make movies. He really don't care about the dinosaurs, about that awe and wonder, about characters, worldbuilding, anything.

I really did go full facepalm a couple times, and it wasn't even in a "so bad that it's good" way. It was just bad. Really, if it were a home viewing, I would've probably turned it off. Tag under ways to torture oneself in a movie theater.

JA Bayona is the only saving grace. This would've been a superb movie in his hands if it *had* superb writing to accompany with. Personally, his direction, and Bryce Dallas Howard are the two highlights here. Howard doesn't get enough credit, and no wonder, for it's hard to see her shine given the material she gets to work with. Daniella Pineda killed it too, but ultimately her character was paper thin. So was Justice Smith, who I don't really know, but the guy didn't deserve it either. Even Chris Pratt's usual charm was not there. No really, can like a dinosaur or a meteorite or something take CT out, and have someone qualified *and caring* about the dinos and the franchise to write the next one? Don't get me wrong, I'm all in for popcorn movies, but this is an entry in its own category. Heck, even the first Jurassic World doesn't look as bad now, sans the shoes.

Can we also talk about how the hell this movie basically destroyed the charm and the very DNA of the series? I realise I sound like those online fanboys complaining about their beloved series, and yes I am disappointed, and no, I'm not even that attached to the franchise, but this really is what it is. A character assassination on the park, the dinosaurs, and everything that is beloved or to be loved in the franchise. There *are* ways to take old, cult franchises in new directions, but Fallen Kingdom is not that case. If that was Trevorrow's plan all along for this trilogy, and people at the studio went hell yes DO IT, I can't. I really can't. Is this why this is called Jurassic World all along? Because it's a dinosaur world? I don't know, and don't care if that's the way and the direction this modern protégé, pardon, prodigy is going for.

Seriously, it's been half a day since I watched this movie, and the more it sinks in, the more fuck yous I want to say to it. Fuck you for killing off the dinos, and playing with our emotions. Fuck you for playing off the sentimental again, oh look baby dino, oh no poisonous gas. Fuck you Colin Trevorrow and Derek Connolly. Fuck you for writing women and young girls, and men, like that. Fuck you for rehashing (and trashing) everything good and possible from the previous movies. You maybe struck gold with that one indie movie (which I now question if it was actually that good, or was I under some kind of spell, because literally nothing else is good in their career), but that was it. You've proved it again and again. No amount of cool effects can hide or overshadow your shallow, manipulative, subpar writing. Who the hell gave you the reigns to the franchise. Oh sure, it made like 2 billions or something. May they burn in a volcano. Maybe instead of throwing shade at Rian, Colin could've taken a lesson or two of what to make of a middle chapter in a trilogy. Oh wait, he's busy with his ego. And thank goodness, for I can't even think what he would've done with Ep. IX. It really does suck for the Jurassic Park series that it's in the hands like this now, and I feel sorry for the fans and the dinosaurs.

I didn't have much of opinion or reaction to the first one, quickly depositing it into the dumb action movie category, what's there to make of it. But this. This is something else. I don't know is that because I pay more attention to movies and writing now than a few years ago, or because I'm just tired of this kind of writing and who it comes from, but Fallen Kingdom really stinks the more I thinks. The way the newfound parent figures are talking to Maisie (was it Bayona?? Trevorrow? What the hell happened there?). The way she's clinging to Owen even if Claire seemingly had a better approach to her. One note characters. The supposed chemistry between Claire and Owen. Now, I get it, two people wanting to get laid, and they're hot and all, but this is just bad. That come joke. At the expense of a woman, of course. Hard eye roll. Gothic dinosaur haunted house turned into a boring and predictable as hell sequence. Even Bayona couldn't save it. Turning the lights off. Really? That thing CAN SMELL YOU FOR FIVE MILES. Sure, looks cool, but where is logic, even for this low bar of a script. The most whatever engineered dino, who I felt sorry for, was only like 20 millions? Seriously?? C'mon, those are really rich people there in the room, and they only bid (and sell for) within 2 digit millions range? I'd rather believe in actual dinosaurs resurrection than that. Not to mention that it probably cost *double that* to make and raise one. That Westworld-esque pre-credits scene. The hell was that. "Can tropical jungles dinos survive in a desert", a question Colin & co. did not google. The scene with the laser on the roof. I felt bad for Bryce and Pratt to have to deal with that script, not that they need my consolations. And, Blue, no sh*t, saving the day, not once, but twice. Just make a goddamn spin-off with her, with some better writers. There was a NUMBER of other scenes that had me in a literal full body cringe, but I don't even want to go into them. One thing, though: I took that nasty woman comment as a compliment, because hell yeah the paleoveterinarian rules. Too bad she's a one note character too, and gets these kind of comments. Did you know she is a former Marine? Neither did I. The only other thing that made sense was Maisie climbing back in her bed, hoping that's all a nightmare. I felt you kid. I too wanted to just wake in my bed like it's all a bad dream.

I almost wish there were a silent version, maybe with some score and sound effects, and just visuals, more visuals, because what comes out of characters' mouths is so bad at times (plus a ton of explanation/tell vs show), that it taints the otherwise decent picture the director is trying to paint here. That would still not help with a ridiculous plot, shallow, manipulative writing, terrible characterization, and the twist *gasps* no one saw coming, but I digress. At least this installment had a proper director behind the camera, with a sense of style and vision, so there was at least that to look out for.

All that being said, did I have at least some fun? Yes. Were parts of it okay? Yes. Intense, suspenseful? More, please. Was it worth seeing it in a theater? Maybe, just for a way spectacle looks good on a big screen. Am I interested in where the setup can take it next? Theoretically, yes. In Trevorrow's hands? Heck no. Will I be seeing the next Jurassic World penned and directed by "everything or almost everything that is wrong with Hollywood" poster boy? Probably not.

As someone in the theater said when the credits rolled, "And now we should pretend it never happened." I wish.