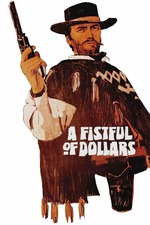 When Clint Eastwood strolls into the dusty town of San Miguel in Fistful of Dollars, we are greeted with the cold familiarity of the Spaghetti Western. This isn’t the romanticized ‘Old West’ of John Wayne. This is the lawless frontier, where women are widows and good men are dead.

Even the film’s production, the first in Sergio Leone's ‘Dollars Trilogy’, carries a pressing moral ambiguity. The film’s story was copied wholesale from Akira Kurosawa’s own Samurai Western, Yojimbo (1964). Though Leone would never admit to it for legal reasons, Fistful of Dollars is quite frankly, a straight-up remake of Yojimbo. Kurosawa would even go on to call the Leone’s work a “fine movie, but my movie”.

The narrative differences between Leone’s and Kurosawa’s versions are subtle. Leone pretty much follows Kurosawa’s original samurai-western to a tee; the story of two warring gangs and a lone cowboy (or in Kurosawa’s case, a samurai) caught in between. But Leone’s version differs in one key aspect – the violence. In Yojimbo, deaths are quick and unglorified. The slashes of the katana are brutal, but never a point of focus. In Fistful of Dollars, Leone doubles down on the vicious madness of the west.

Fistful of Dollars is a compelling movie on its own, but its slavish mimicry of Yojimbo saps the verve out of Leone’s effort. And yet Fistful of Dollars stands as a beacon of the Western genre simply for Clint Eastwood’s debut as the iconic 'Man With No Name'.