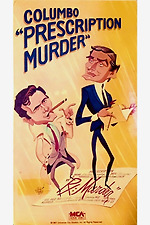 Tapdances happily along the TV/Movie divide, with a stylish title sequence, jazzy, sometimes experimental score, and the kind of long, quiet scenes that weren't standard for TV until decades later. But the visuals are pure late 60s TV (an aesthetic I happen to love, so that's not a demerit), as is most of the acting. There are moments of style, though - I particularly like the Hitchcockian shot of the victim's hand falling on the piano.

As for the Columbo character, he's not quite fully formed yet, a lot more openly confrontational (not to mention neater) than the iconic character that would eventually emerge. But Peter Falk is still magnetic to watch, and his appeal is completely evident even if Columbo himself still has a little growing to do.

Best non-Columbo grace note: The opening sequence, featuring the most pretentious party game of all time.