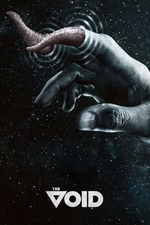 I wasn't even sure what this was but I went because I found out my man Windom Earle was in it. I'd heard it was some kind of John Carpenter pastiche and indeed the plot does seem like a blend of Prince of Darkness and The Thing, with some Lovecraft, a little Event Horizon, and undoubtedly some movies I haven't seen thrown in, but overall the mood is way closer to Fulci than JC. Carpenter specializes in clean, unfussy action that allows his ensembles to sing, whereas Fulci is more interested in semi-anonymous clusters of people surrounded by howling abattoirs. By that standard the cast here is actually better than you might expect, from Windom on down, but this still seems to be missing a little something that I can't quite identify. Or maybe I'm just mad that the bad guy keeps saying "the abyss" instead of "The Void." That's a different movie, dorks!