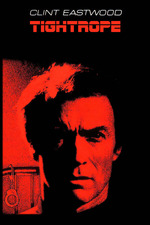 Make no mistake, Tightrope is a slasher movie. Oh, they may say "thriller" or "cop drama", but they are full of shit.
It came out during the hey day of the slasher and has all the elements of a slasher. They may say otherwise, but we the fans know what's what.
Eastwoods role as Wes Bloc a broken, corrupted failure of a man is a bold move on Eastwoods part. I have recently heard it described as a "deconstruction" of Dirty Harry, and I could not agree more.
Win loose or draw, it's one of Eastwood's most complex characterizations.

The Good....
Instead of being a full on slasher\cop flick its a deep character study.
It harkens back to the detective films of the 40s, where the lead is a complicated, morally grey, damaged person.
Dan Hedaya has a supporting role, that's very entertaining. (He is great in everything.)
God help me...I want more female oil wrestling with dwarf referees in movies, and I want it now.
This is super sleazy for a mainstream film, its like Eastwood in a Cannon film. (Fuck, could you imagine that shit?)
Eastwood really gets to show his acting chops here.

The Bad....
I feel the whole struggling single dad portion of the movie does not work well, its for sure the least interesting part of the film.
There is some creepy as balls sex scene involving a nude oil covered Eastwood, that I could have very comfortably lived the rest of my life with out seeing. (My libido died just a little.)

Tightrope is an enjoyable thought provoking "slasher" flick. Give it a spin just don't be eating during that sex scene. (shivers)

Tenacious D in The Pick of Destiny