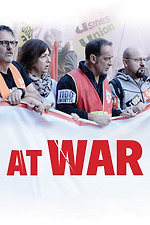 We are entered "in medias res" into the action of the employees of a factory in France, setting up to contest and fight the sudden closing down of their workplace due to its delocalisation.

As in Stéphane Brizé's previous film La Loi du Marché (The Measure of a Man, 2015), Vincent Lindon shines as the group's leader and, as the only professional actor in the film, he guides his costars with his usual generosity and warmth. As a spectator, one can see that Mr Lindon's investment in the film is entire and it draws one in.

The quality of the film rests also in its well thought-out pace which alternates agitated debates among the syndicalists (reminiscent on occasion of the beautifully directed debates in 120 Battements par Minute : how do you film spontaneity and people passionately interrupting each other?) and calmer scenes where the score overtakes dialogues and evoke the incessant waiting of these people — waiting for a decision, waiting for stability.

The situation depicted in this film is one which will be more than familiar to French viewers, but it is really admirable on the director's part to delve in detail to what otherwise may only be a 2 minute "reportage" on national television, where the urgency of the situation and the humanity of its fights are severely diluted.

An absolutely engaging film, with fierce performances. Like the aforementioned film 120 BPM, it underlines the necessity of activism, and of fighting in unison against faceless globalisation.