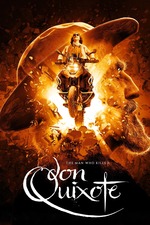 The Man Who Killed Don Quixote

What a pleasure to *finally* see Terry Gilliam's long delayed project. I had forgotten how entertaining his directorial vision can be — grotesque, humorous, zany and warm.

I for one was very happy to see Adam Driver take over the role initially to be played by Johnny Depp (*cough* wifebeater *cough*). Mr Driver brings his charm to both his present-day blasé commercial director character as well as to his sweetly passionate film student persona.

Jonathan Pryce is surprising moving as the titular character — there is a playfulness in his eyes as the small village shoemaker who choses to entirely invest himself in the character of Don Quixote.

Side players Stellan Skarsgard, Olga Kurylenko, Rossy de Palma and Sergi Lopez seem to be having truckloads of fun and it is definitely infectious to watch.

The experience of viewing this film struck me on occasion as Richard Linklater's Boyhood or Sunset Trilogy did, with the tangible awareness of time passing. As someone who watched Lost in la Mancha — the documentary made during Gilliam's first disastrous attempt at bringing this project to life — when I was a nascent cinephile teenager, seeing the completed piece more than a decade later was a particular experience — joyful and also quite poignant.

Most importantly, I felt immensely happy for the director being able to finally share his vision and reach a sense of conclusion with an artistic project that took so long to make. It underlines to necessity of persistence in creativity, with courage, boldness and authenticity.