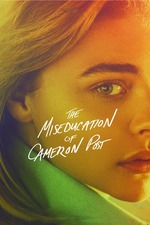 Desirée Akhavan's beautiful second film about a group of teenagers undergoing gay conversion therapy is a soft sensorial wonder filled with the sadness of youth, particularly exacerbated for those like I, of Desiree's generation, as the film is set in the seeming safety of the early nineties, when we were children, swimming in an internet-less dreamworld, isolated in desire.
—
The central triptych of Chloé GM, Sasha L and Forrest Goodluck carry this story of friendship and self realisation superbly while John Gallagher Jr and Jennifer Ehle provide a layered portrait of those running the camp.
—
The script is so freaking phenomenonal, humorous and sincere. It's the most beautiful coming of age movie of the year, and lord knows I'm a sucker for those.
—
Interesting parallel : I actually watched this movie in the exact same tired screening room as Girl, Interrupted, the seminal film of my teenage years, some almost twenty years ago. I enjoyed the echo that this provided.