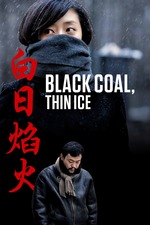 This is full spoiler talk:

She killed a man who had used and abused her simply because she couldn’t repay the debt she owed for having destroyed his expensive coat. Her husband cut the body into small pieces and disposed of it. But in order to take the fall for her, he faked his own death by planting his identification on the pieces of the dead body. Yet he, being thought a dead man now, can no longer live with her. He stays in hiding, only to meet up with her for rare sexual encounters. However she, now being single, is courted by a number of men. She asks them to stop following her, but they insist. She’s shy, introverted, and has grown accustomed to being used by men. She doesn’t make a fuss when her boss gropes her, or customers want to court her. Nevertheless it makes her hiding husband (who continually watches her) jealous. He kills the men attempting to court her, and disposes of their bodies in similar fashion.

Meanwhile, an ex-cop remains overly fascinated by the case. He’s been known to sexually abuse the women he encounters as well. An early sex scene ends with an awkward goodbye at a train station in which he tackles her in an attempt to make her stay. Later, he is shown groping a woman at his new place of employment while other men stand around laughing. It points not just to a minor problem with specific men, but a problem of cultural acceptance of this behavior. Nevertheless as the story continues and he moves in on Zhizhen, he forces himself upon her as well (several times). Yet the film ends with him having triumphed in this case, and going on to dance freely while she is taken away to prison.