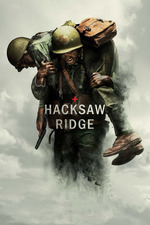 Somehow this moving war film manages to be both awe inspiring and cheesy and over-the-top all at the same time. It's based on a true story and does a pretty good job portraying these events, even if it tends to over-idolize the central hero to the point of nearly keeping from giving him a compelling character arc. The early romance is as corny as any rom-com you've ever seen. But then again, this story is too awe inspiring to keep from telling, and the brief bits of backstory and Andrew Garfield's fantastic performance holds things together.

However Mel Gibson's methods eventually take a turn from "Saving Private Ryan" to "Rambo" in ways that seem to glorify death and dismemberment on a large scale. That style seems at odds with the central character's pacifism. He refuses to carry a rifle or take a life, but he becomes a war hero for his bravery in saving the lives of countless wounded soldiers. He even tries to save a few injured Japanese soldiers as well. That's what makes the film's climax feel so drastically overdone.

I've been back and forth on this movie. It gets its point of "war is hell" across and then tries to one-up every other WWII film ever made with explosions and severed limbs. It's such a contradiction that I simply can't seem to make up my mind about it. But then again Desmond Doss was a contradiction to the hellscape in which he served. Perhaps Gibson made it the way he did as a commentary on that fact. And then he still managed to go a bit too far.