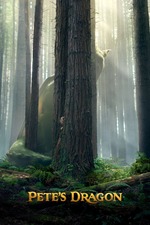 Pete's Dragon is a nice bit of family fun that recalls fantasy films of a different era. But it's all a bit too fluffy and light for its own good. Most of the characters here are paper thin, likely due to the film's nimble pace that scarcely allows for small character moments. A lot hinges on a children's book that proves to Pete (Oakes Fegley) and Grace (Bryce Dallas Howard) the necessity of the nuclear family. However, the same can't be said for Elliot, whose tacked on ending seems to indicate he found a family as if from nowhere, without allowing him a moment to acknowledge the fact.

At times it feels as though David Lowery is channeling both The Iron Giant and Where The Wild Things Are, though this film is neither as character driven nor as whimsical as either.