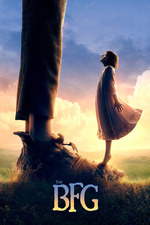 The BFG has characters and situations perfectly suited for children's bedtime stories, but I'm not sure it's a fully formed film. There were several times it felt like it had run out of steam, but there was something so joyous about watching the two central characters interact that I continually forgave its lacking story and often childish sense of humor.

This is a truly beautiful film to look at. Spielberg continues to be a brilliant visual storyteller with a mind for small details. Truly you'd need such a thing when following a small girl into a big world of giants.

Mark Rylance is brilliant. His motion capture performance and his vocal performance is excellent throughout. I have my doubts there are too many actors that could sell Dahl's whimsical giant-speak the way Rylance does.

This is the sort of fantasy film I would have been captivated by as a kid. I can't imagine it won't still do the job for kids today.