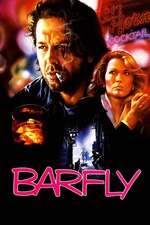 'Do I dare drink without prerogative? Such resolve is not mine to claim.
Forgive me Lord for I became frightened and drank with greed, only to keep you at a distance, therefore do not judge the perpetually inebriated state of mine; I drank, I coaxed divinity with my flattering drunken charms; I persuaded authority to allow me to make myself a drunk.' - Local Folk Song

Mickey Rourke becomes Charles Bukowski the first instance that the camera captures his ruffled portrayal, and the actor is gone; replaced by the 'laureate of American lowlife' (a title bestowed upon Bukowski by Time Magazine).

Our destitute and achingly lonely writer is shown shifting from one menial job to another, not finding any respite from the machinary he has a deep loathing for, until he finds Wanda (not the fish) and they merrily share their loneliness and a bed together over copius amounts of alcohol and sex.

Henry Chinaski writes by day and drinks himself silly by nights, with Wanda watching over him like a surrogate mother. Faye Dunaway manages to keep her own in the face of the acting juggernaut, Rourke. Chinaski gets into bar-fights, bad publishing deals, good publishing opportunities, however what matters most to him is the code he holds on to with filial piety; pushing away everything that even gives a whiff of control or supremacy of the 'hollow and meaningless' world around him.

Rourke is still not appreciated and is treated like an outsider (despite 'The Wrestler' and 'Sin City') by the Hollywood executives for obviously damaging reasons. In 'Barfly' he sails throughout the film with a slight smile, a dying shine in his eyes and the charming drive (into a brick wall), the instinct and the urge to survive just 'one' more day. Dunaway and Alice Krige and Frank Stallone and the man himself, Bukowski cannot keep him from becoming all those things and as a result making us forget that it is Rourke behind the dismal, alcoholic writer that picks fights like children pick flowers in the park.

A in-depth study of the hatred for authority and dependence on other people, 'Barfly' (directed by Barbet Schroeder and presented by Francis Ford Coppola) is a film that shows us that a man can be melancholy if he wants to, he can be forever ridden with poverty, by choice; choice that perhaps only the most sensitive and gifted souls can make; this film shows us a man who is brave enough to turn his back on the good life only to return to the dingy bar, to drink himself silly again and then pick fights in the back-alley for money. During all that Bukowski/Chinaski also sells his writing to small publications and dailies and manages to make the big guns get up and take notice.

However, some men just don't want the high-life, they are better off working in post-offices and writing and drinking and finding some, if at all, solace in the bosom of a lady of the night.

'What is wine, what is intoxication?
all this is due to your kindness.
You served me a drink with your eyes such
that I have forgotten myself.'

Anti-establishment. Poetically tragic yet full of haunting desires and Rourke, makes 'Barfly' one of the finest films to ever have been scoffed at by the casual movie goer.

We, the keen viewers know better than that. Or, maybe, should know better and look at this little, grand film and Rourke with all sensibilities of the art intact.

'I am a follower of love since the beginning of time
and I do not care for piousness or religious rancor.
My head has found your house,
now I do not search for the Mecca' -