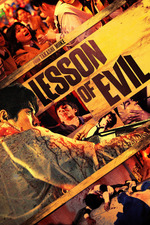 Lesson of the Evil

With posters reminding us of 'American Psycho, 2000' and 'Bad Teacher, 2011', Miike makes it clear, even before the viewer has tapped on play, that the sculpted, pouting, photoshopped gentleman on the cover is gonna trip on purple sticky salvia, pick up a shot-gun and have his 'Columbine' moment - like a fox. The cunning is shown in the form of conflicting identities. Both well aware of each other.

Giving Odin, the god of war and death, full credit and the souls the Norse god has demanded of him, Hasumi (Hideaki Itô) turns to look at the survivors and apologizes with convincing sincerity. He is darn awful sorry but it had to be done. He leaves with a terrifying smile.

The first act is bright and full of twelfth graders doing what most twelfth graders do. We are introduced to a charming and a well-dressed young man who's plan to eradicate the practice of cheating during exams is applauded but rejected by the school board.

The opening to which the viewer is repeatedly brought - through visuals of a nude man and 'Mack The Knife' by Ella Fitzgerald, playing in the back, in Japanese and sometimes in English - is puzzling, plain and simple 'no explanation given'. For that we have Miike's 'Lesson of the Evil: Prologue' a 2012 mini series.

At one moment The camera pans in to show us a iron rod ending in a meat-hanger covered in crusted blood and the mother of dust bunnies; resting against a shelf. What the fuck is or what the fuck was Mr. Tsurii (Mitsuru Fukikoshi) doing with an instrument from Jigsaw's house of 'barbied' dolls?

The second act is darker, with shadows of trees; metal shacks; brooding; suspicion, allegations, doubts, 'The Sorrows of Young Werther' by Goeth; cell phones, rape, again the weird song playing in a foreign tongue to visuals of a stern and thoughtful man, exercising or bathing in his ramshackle, murky and dreary, make-shift home. Although we don't see much of that either.

The third act is a build up to the shotgun show, being put together by an eclectic bunch of students, which include the intelligent, the brave, the 'Battle Royale, 2000' fan, the cowards, the bullied, the bullies, the depressed, the suicidal, the tech-savvy, the what have you. Then the film shifts gears and all faculty members leave except 'Sarah Palin loco' and the sitting ducks in Anime uniform. That should not have anything to do with the prologue.

'The trick is William Potter, not minding that it hurts.' I apply the 'Lawrence of Arabia, 1962' quote to films with plot holes that I would really like to dismiss or not 'mind'.

The final act is where Miike's reputation exceeds its own boundaries as the violence unfolds on-screen on the helpless and the vulnerable, almost brash at first, a shift to routine and finally the 'ballet shots'. The sudden interruption of short conversations does get predictable but not the stylish ways the 'interruptions' have been filmed.

The final thirty minutes of this 123 minute feature is splattered in yellow and neon and it is filled with multi-coloured balloons, bright orange food stalls, a rock music-lounge, a haunted house, a 'moon landing diorama' room. All to celebrate graduation and have a nice time while at it. It is later splashed in the red of the blood. Much like Bates High School in the fall of 1976.

Miike feels a little off in this one. Although the cast, the editing, the direction, heck, the entire production seems almost flawless. However there is something missing from an otherwise sweeping story teller. I almost did not enjoy or derive as much as I imagined I would until the film ended with a 'to be continued' title before the lovely ant-march credit roll.