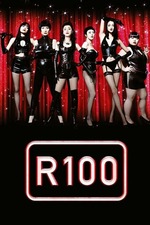 The Queen of Saliva dance number is King, it is the fucking Nobel Prize for Palahniuk, it is the Lifetime Achievement Oscar for Vincent Gallo, it's the Enola Gay of mucus, it is a mighty Himalayan slap in the face of the likes of Haneke and Trier and Ferrara, it is the Grammy for the best fucked up score ever. Life would be hell without the dance number. I just realised that. How did I manage to come this far without 'The Queen of Saliva' dance number that pays tribute to the ultra B Japanese films from a very long time ago. It is the 30 mil Lotto you won two days before you died.

This has to be the strangest film I have ever had the pleasure to watch. Notwithstanding the loose ends and the fact that director Hitoshi Matsumoto (Big Man Japan, 2007) deliberately leaves holes in the sickly orange plot by approaching this avant garde, 'Hollywood anti-thesis', fuzzy-to-the-hilt film. You know that because the hole that was not covered, turns out to be a portal for the CEO (Lindsay Kay Hayward - a seven foot wrestler turned actor, also known as Isis to her fans) to appear from and dive in to a pool, five hundred and twenty seven times.

'Ichi' of 'the Killer' fame (Nao Ōmori) is now a loving father and all grown up and goes by the name of Takafumi Katayama. However the mundanity of life makes him join a seedy, underground Bondage club and things spiral out of the fourth dimension and control after then.
Is it really a film about S&M as the critics say it is, by making leather and whip cracking and the 'Leather Harness Mouth Belt with Soft Rubber Ball Gag' from eBay the epicenter of debate? I think not.
The film is an alphabet soup of one farce yet potent idea too many.

A well-meaning film, which ends at the half point and then begins again, pulling the viewer in to the bed with it, by force. 'R100' is an insane film that makes you feel everything from 'dying of laughter' to 'wait a second, where'd the cop go?' to 'the pill popping concierge, what... who...?' to 'no fucking way, that's not a fil... what the fuck?'.

R100 is Dumbo in the fridge, it is Jaws tearing itself apart, it is fucking Oldboy coming outta the room after a 100 years with a swollen face and shit eating bloated smile on his face.

'R100' is an alternate universe that asks questions like these: What if Takashi Miike made a fourth film for the 'Before Sunrise' franchise and what if Shion Sono directed 'Titanic'. Unimaginable.

I really liked how Matsumoto blurs the lines between reality and the conviction with which a warped reality takes its place. I liked the film very much, in all its baffling, inexplicable, extra-ordinarily outlandish glory.

As for the critics, Matsumoto made sure he shut them up even before he shouted 'それは完全なだ (that's a wrap) in to the blowhorn.

Was that an earthquake?