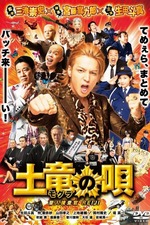 Donnie Brasco is paid a visit by a bunch of Yakuza gang members and Takeshi Miike in this Manga adaptation, shot comic-book style.

What amazes me is Miike's energy, whose levels are going through the roof (or roofs), it seems, more than Duff McKagan's blood alcohol in the Nineties and Jimi Hendrix's heroin toxicology at the time of his death, combined. Those are bad associations, however the impact of a Miike film is no less than an African white rhinoceros charging at you and then impaling you to the wall with its dermal horn, while you look at the intestines exit the stomach and fall to the floor with a thump and a few slithering splashes.

'Undercover Agent Reiji' is funny, ingenious and 'Miike' crude with the camp notched up to the 'Manga' level. The kaleidoscope film, with its blinding colours, in-jokes and Nickelodeon animation should not make sense. The brilliance lies in the fact that not only does it make sense but also keeps the viewer completely enthralled and entertained and satisfied with its flair and fluidity, which keep the 'outrageous' from going all boob-slip.

An asshole policeman Reiji (Tôma Ikuta) is almost fired until his resilience and an escort service business card make the Captain re-hire him as a mole. This leads to the transition of a clueless Reiji in to a bad ass motherbitch who wears the sleaziest boots ever. He must infiltrate the most dangerous Yakuza clan in the galaxy and bust their drug deals and their balls, from the inside, all along winning the trust of Hiura played by the dazzling and intense Shin'ichi Tsutsumi (Why Don't You Play In Hell?, 2014); a Yakuza mediator who loves jokes and butterflies.
Oh, and by the way 'the hot sauce in the bubbling eyes' torture scene is in here somewhere, however it is deliberately brought down a few decibels and minutes from 'pouring smoking cooking oil on boiling skin'; perhaps to not go overboard with the rest of the over-the-top Manga demands. The white haired Tsukihara (Takayuki Yamada) is yet another force to reckon with.

Filled with street fights and men throwing away their weapons to go mano a mano, old school style, and tongue in cheek melodrama, 'Undercover Agent Reiji' is not filled with ultra blood and gore, deliberately, it seems; for the violence to not get over the top like in Miike's other films with a reputation.

Coupled with breathtaking visuals and even more soul-wrenching costume design (I'm not complaining) and the Anime costume kink, the film delivers a jab so hard that you feel like 'Narrator' from 'Fight Club, 1999' - liberated.

Miike and his bandana make fun of everything, including this film, which is quite heart-warming, just like the diamond studded teeth of the 'Bond Jaws' by Miike.

Overall, 'Agent Reiji', although not for everyone, is a marvelous, highly charged and an oddball cinema/DVD outing (a bit dragging though, with its explanations for the newbie) with a laughable message.

A high-grade film that is full of flagrant artistry, which does not offend. Well, not this viewer at least.

A must watch for the 'Miike-Manga-Grindhouse' disciple.