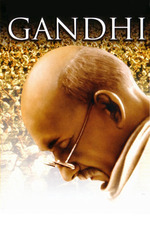 So many reviews about this one are like "it's too tedious and simplistic, but Ben Kingsley's performance is great"...but on revisit his performance is extremely overrated. I was constantly aware of the acting, wasn't convinced of the supposed transformation, and got only surface level thought and emotion from him (aside from a single scene where he cries). There is a knowing grin throughout too much of Kingsley's performance that ruins the sense of realness, of danger, and of being the actual person who lived during the time period. The sense of spirituality and eventual frailness also did not come across either. Bleh.

What I admire about the film is the physical scope it attempts, the feeling of India itself and the multitudes of people there, under duress of colonialization, and the noble attempt to not use violence even in self defense. It's only achieved fleetingly here, but there are times when the feeling of a nation and their struggle do come across with elegance. The detail of the production design, sound design, and the sparsely used music are very commendable. I wish the cinematography had been more daring though; it's handsome but too clean and lacking in contrast.